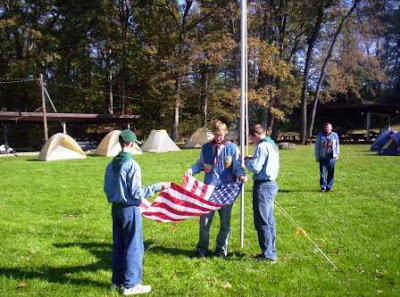 Rob Gable, who is with the Rittman (OH) Unit of Grace Brethren Boys organization, on April 13, 2007, accepted the temporary appointment to the position of Director for National Director of Boys Ministry.

As part of that position, Gable is looking for a few “District Field Representatives” to aid in the promotion of GBB.

Gable grew up in the Rittman Unit and attended the GBB High Adventure in New York after his senior year of high school in 1995, spending a week canoeing the Stillwater Reservoir and trekking the surrounding Adirondack area.

During that week, Gable says, “I was challenged physically, mentally, emotionally and spiritually. By the end of the week, after hearing a challenge by National Director Roger Mills, I realized I was being called to ministry with GBB.”

He worked as a leader, as time would allow, for the next several years. After graduating from the Ohio State Highway Patrol Academy in 1999, he began to spend a lot more time with his unit.

Several years of growth, reorganization, and establishing structure have led to the present. The director’s position description is as follows:

1. Responsible for promoting the organization and implementation of GBB’s ministry to boys
2. Shall enlist “District Field Representatives” to aid in the promotion of GBB as a ministry at the district level.
3. Be a liaison between the GBB Board of Directors and the field representatives
4. Work closely with the chairman of the Curriculum Review Committee
5. Prepare a report of activities

The District Field Representatives will:

1. Be responsible for assisting with the promotion of GBB.
a. Attend District Conferences and prepare district conference reports for GBB.
b. Visitation to existing GBB units within the district
c. Follow-ups with prospective churches who show interest in GBB.
d. Assisting their respective district board with GBB Outpost duties.
2. Need to be available to travel to other units / other churches.
3. Need to be able to keep scheduled contact with the National Director of Boys Ministry.
a. To know when to contact a church.
b. To report their visitations to other units
c. To report any other events.

This year’s High Adventure will be held June 24-30, 2007 (Sunday-Saturday) at Sproul State Forest near Tamarack, in north central Pennsylvania.

Activities will include overnight canoeing, overnight backpacking, shooting and fishing. Cost will be $50 plus the cost of food, and food will be provided on overnight adventures. Registration Deadline is May 1.