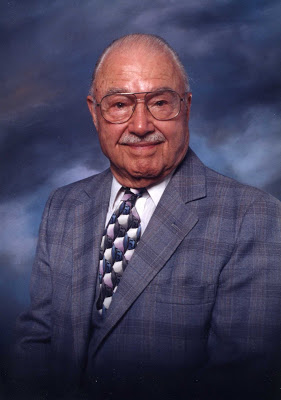 A memorial service will be held Friday, March 14, 2008, at 4:00 P.M., at Rose Drive Friends Church, 4221 Rose Drive, Yorba Linda, California, for longtime Grace Brethren pastor, Bible teacher, and Jewish evangelist Robert Elias Allen Miller (Robert E.A.) of Placentia, California, who peacefully went home to be with the Lord, surrounded by his children, on Thursday, February 28, 2008. He was 92.

He was the oldest of ten children born to Robert Paul Miller and Anne Alverta Meyers. For more than 60 years, he was a minister in the Grace Brethren Church and with Chosen People Ministries.

Miller attended Wheaton College in Wheaton, Illinois, graduating in 1935 with a Bachelor of Science degree in biology. He married Althea Marie Schwartz on September 3, 1935, and after a brief honeymoon, they settled in Ohio, where he attended Grace Theological Seminary.

Upon graduation from seminary, he and Althea moved with their two young children to Tracy, California, where he served as a pastor for three years.

When Robert and Althea were married, their life goal was to serve as missionaries in Africa, but when it came time to make the final plans in 1939, the United States government would not permit them to leave the country as first-time missionaries with two small children because of international unrest. So they began their ministry with the Brethren church in Tracy, California.

In 1941 Miller accepted the call to pastor the Grace Brethren church in Martinsburg, Pennsylvania, where he also taught public school since so many young male teachers were called or volunteered to serve in World War II. In Pennsylvania four more of nine children joined the family.

In 1949, the Millers moved Roanoke, Virginia, where Robert served as pastor of the Ghent Brethren Church. In 1956, the family moved to St. Petersburg, Florida, where Robert and Althea both taught at the Grace Livingston Hill Memorial School and Robert pastored a small church.

In 1960, they moved to Glendale, California, where Robert served as pastor of the Grace Brethren Church. While in Glendale, Robert took a stand against anti-Semitism by successfully protesting the establishment of the American Nazi Party headquarters.

In 1966, Robert and Althea joined the staff of The American Board of Mission to the Jews, now the Chosen People Ministries, as field missionaries, a call that moved them to Washington, D.C., where they served until 1972. They then returned to California (Orange County) where they continued their work with the Chosen People Ministries until their retirement in the early 90s.

Robert continued to teach, conduct Bible study classes, and mentor young men right up to the end of his life. For some years he wrote teacher quarterlies for adult Brethren Sunday School classes. He also taught a weekly Bible study class for more than 25 years at a Seal Beach (CA) retirement village that is home to many retired Brethren church pastors and members.