Robert Holmes, who served as pastor of the Grace Brethren Church, Homerville, Ohio, for 50 years, has died. His obituary appears below. 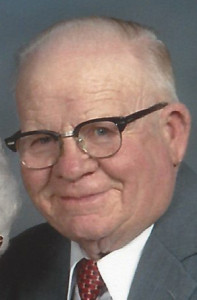 Robert F. Holmes, 91, of West Salem, Ohio, died Tuesday April 18, 2017, at LifeCare Hospice of Wooster, Ohio. Funeral Services will be Saturday, April 22, 2017, at 11:00 a.m. at Grace Brethren Church, 8992  Firestone Road, Homerville, Ohio, with Pastor Robert Combs officiating.  Friends will be received at the Matteson Funeral Home on Friday, 1:00 to 3:00 p.m. and 5:00 to 8:00 p.m. Burial will be in Fair Haven Cemetery. Online condolences may be shared at the funeral home website at mattesonfh.com.

Bob was a member of Belgian Draft Horse Association of America. He raised register Belgian Horses for 32 years and judged many shows.

He also was secretary of Fair Haven Cemetery for over 26 years, drove bus for Black River School System for 23 years, and was a painter for over 20 years.

He is survived by his son, Donald Holmes of Cutler, Ohio; brother, Stanley Holmes of West Salem, and nieces and nephews.