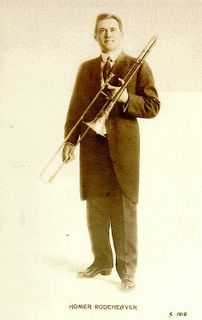 Sunday, December 18 is the 50th anniversary of the death of one of Winona Lake, Indiana’s best-known residents, Homer Rodeheaver. The following article is excerpted and edited from a discography article on the songleader/publisher/recording artist.

Homer Alvan Rodeheaver was born on October 4, 1880, in Union Furnace, Ohio. The family moved to Tennessee when he was a child.

One brief biography states, “Homer Rodeheaver is a Southerner. He began his career in a mountain log camp [his father owned a lumber business in Jellicoe, Tennessee], and in later years learned the trombone and played in the 4th Tennessee [Regimental] Band, going with them to the Spanish-American War. After singing and playing his way through the Ohio Wesleyan University, he leaned toward the law, but was induced to enter the evangelical field.”

In 1904 Rodeheaver entered the musical evangelism field and in 1909 joined Billy Sunday to serve as vocal soloist and songleader for Sunday’s many nationwide gospel crusades. He was the George Beverly Shea (Billy Graham’s soloist) of his day, but, unlike Shea, he also led the congregational song services with his trombone and the Billy Sunday 2,500-voice mixed chorus.

He had a talent for leading audiences in the song services before Billy Sunday’s sermons, his genial and informal manner getting even the most shy and retiring to participate. By all accounts a jovial man whose sincerity was infectious, he was affectionately known to associates as “Rody.”

He worked with Sunday for 20 years, until 1929, and wrote a book titled “My Twenty Years With Billy Sunday.” Sunday was the leading gospel evangelist in this century’s early decades and was important to the cause of prohibition.

Rodeheaver’s most recorded song was “Brighten The Corner Where You Are.” It was Sunday and Rodeheaver’s theme song, and Rodeheaver recorded it for at least 17 different labels. He cut many duets with a colleague in the Sunday campaigns, contralto Virginia Asher, called Mrs. William Asher on most labels. Their first release–in July 1916–was “In The Garden.”

Introducing the new artist, the May 1914 issue of Edison Phonograph Monthly states, “As a boy he had a contralto voice, and when his voice changed, it developed into a splendid robust baritone….About ten years ago Mr. Rodeheaver felt the call to evangelistic work, but refused to enter the work at that time as he wanted to finish his college course and go to law school.

“However, these plans were spoiled, for he accepted what he thought would be a brief engagement as a musical director with Dr. W.E. Biederwolf. He stayed with Dr. Biederwolf for five years and then accepted the same position with Rev. W.A. Sunday.

“In his work with Mr. Sunday he…directs the largest choruses in the whole country. They number from twelve hundred to two thousand in the different cities. He possibly sings to more people night after night than any other man in the whole world today.”

In late 1920 he founded his own record company. It was evidently headquartered in Chicago, at first at 440 South Dearborn Street. From the beginning the new company had recording labs in Winona Lake, Indiana (later in New York City as well and perhaps Chicago) and branch offices were established on the East Coast.

The April 1921 issue of the trade journal reports: “The first releases of the Rainbow record of the Rodeheaver Record Co….have met with much favor….For the present, at least, the recordings will be confined entirely to sacred songs….It is planned to have any excess profits from the record business help support a training school for evangelists at Winona Lake, Ind. The Rainbow laboratory has been established at Winona Lake, Ind., and the distribution of the records will also be made from the offices of the Rodeheaver Co….”

The Winona Lake facilities were the center for Bible Conferences, and Rodeheaver had assembled a mixed chorus. Two Rainbow records feature the Winona Lake Chorus of 600 Voices: “Hallelujah What A Savior” backed by “Awakening Chorus,” and “The Star Spangled Banner” backed by “Brighten The Corner.” Rodeheaver sings a vocal solo on the last number.

When his association with Billy Sunday and his crusades ended in 1929, Rodeheaver’s music publishing company was flourishing. Rev. Sunday passed away in Chicago in 1935.

Since 1909 Rodeheaver had been in the gospel song publishing business under names such as the Rodeheaver- Ackley Co, The Rodeheaver Co., and the Rodeheaver Hall-Mack Co. He bought up many copyrights and re-copyrighted them under his own name.

He is credited with publishing 80 different songbooks. He composed a few songs himself and the music for a number of others. He owned the copyright on hundreds of songs. His two most famous copyrighted songs were “In The Garden” and “The Old Rugged Cross.”

In the 1940s he served for a time as the music leader for the Bob Jones University.

In his last years Rodeheaver presented sacred concerts, often with a sermon. One observer who attended such a concert in 1951 reported, “Rodeheaver was in good voice and still played trombone solos, telling the audience it was the same trombone he had played for troops in the trenches, which may refer to his time with the regimental band in the Spanish American War.”

Homer Rodeheaver passed away in the town of Winona Lake on December 18, 1955, at age 75. His gospel publishing company continued for about 20 years after his death, being bought out by the Word Publishing Co. Today his copyrighted songs are shown as by The Rodeheaver Co., a Division Of Word, Inc.

The museum is located in Westminster Hall on the Grace College campus at Ninth Street and College Avenue in Winona Lake, Indiana. Hours are Tuesday through Saturday , 12:00 noon to 5:00 pm. Special tours can be arranged by calling 574.372.5100, ext 6511.