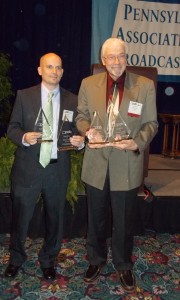 For the second year in a row, Pastor Roland Maust of the Grace Brethren Church of Uniontown, Pa., has been honored by the Pennsylvania Association of Broadcasters for excellence behind the microphone. He was the only person in the state this year to receive two separate awards:

Click here to read a report about last year’s award.

The Grace Brethren Church has been on the air in Uniontown since 1945. As World War II ended, the National Brethren Radio Hour began airing on eight stations across the country, including Uniontown. After 67 years, the Uniontown Grace Brethren are still very much on the air at WMBS 590 AM every Sunday morning at 8:05 a.m.

In addition to the weekly “Grace to You” program, Pastor Maust also airs 60-second commercials for the church, as well as “The Civil War in Fayette County” spots commemorating the 150th anniversary of the Civil War.

You can listen in to the weekly “Grace to You” in one of two ways:

The Civil War series can be found on www.youtube.com.
Social Share