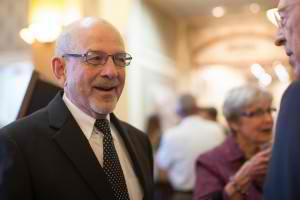 Former Grace College Dean of Enrollment and faculty member Ron Henry was recently honored with a lifetime achievement award by the North American Coalition for Christian Admissions Professionals (NACCAP). Henry served Grace College for over 50 years in various positions and played an integral part in creating the NACCAP organization over 40 years ago.

Henry was honored on Sunday, June 1 at the opening session of the NACCAP conference, held this year at John Brown University in Arkansas.  Eight members of the current Admissions team were present at the conference, along with over 500 admissions professionals from around the nation.

Grace College President Dr. Bill Katip said, “I began my career at Grace College as an admissions counselor in 1974. Ron believed in me and gave me my first position with Grace.” Katip went on to say, “Ron Henry personifies the early years in college admissions. On behalf of the entire Grace community, I want to wish him a hearty congratulations.”

Since 1970, NACCAP has been the foremost professional enrollment organization promoting career development, spiritual growth, and mutual cooperation between United States and Canadian institutions of Christian education. NACCAP desires to serve the interests of its member institutions and students seeking admission into Christian colleges, universities, graduate schools, and seminaries by providing professional accountability, support, and recruitment standards.