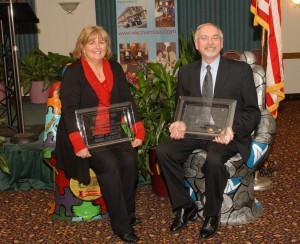 The leaders of two Fellowship of Grace Brethren national and cooperating ministries were honored Thursday night by the Kosciusko County (Indiana) Chamber of Commerce.

This year, the chamber will be celebrating its 100th year in the community.

OrthoWorx Executive Director Brad Bishop noted that Manahan’s leadership helped get rid of the “town and gown” gap between Grace College and the community.

Bishop also recognized Manahan and his role in the building of the Orthopaedic Capital Center.

“He did something many thought wasn’t possible – he brought the heads of the major orthopedic companies together to collaborate on a major joint project,” Bishop said.

A statement from Grace College and Seminary said it was the vision of Manahan “to involve Grace College in the local communities that resulted in the renovation of Westminster Hall and the building of the Orthopedic Capital Center. His continued vision to connect Grace to the area has resulted in the grant from the Lilly Foundation to establish OrthoWorx. Now a grant from OrthoWorx is allowing Grace to establish a certificate program in regulatory and clinical affairs. Classes for this new program will start this spring.”

“It’s wonderful to be surrounded by good people,” said Manahan. “To be a part of a community that values change, obviously, I thank God for his goodness and the opportunities he’s given us.”

The award is designed to recognize those businesses that are leaders in hiring people with disabilities and providing them with training. Carroll explained earlier that the award was based, in part, on Grace Village’s experience of seeing an employee learn to read while in the employ of Grace Village.

Incorporated in 1974, Grace Village is dedicated to preserving the richness of life for seniors in a comfortable and secure Christian setting. Grace Village is affiliated with the Fellowship of Grace Brethren Churches and seeks to do all in the spirit of Jesus Christ. Nearly 300 people from all walks of life call Grace Village home, residing in 48 condo style homes called “Robin Hood Homes”, 117 Independent Living Apartments that include studios, efficiencies and 1 to 2 bedroom apartments and in the Licensed Assisted Living 52 studios and suites.  The Village’s Health Care offers both intermediate and skilled nursing care and there is also a new Rehabilitation Center with 12 private suites.   Grace Village is situated on a beautiful 43 acre campus east of Winona Lake on Wooster Road.

Steve Miller, a member of the Winona Lake (IN) Grace Brethren Church and CEO of the local hospital, is the chamber’s new board chair, and a new member of the board is Tim Ziebarth, who directs the alumni program at Grace College and Seminary. The 2010 Dimensions of Excellence Award for Business of the Year was presented to Silveus Insurance Group of Warsaw.  Several members of that organization’s top management, Scott Silveus and Craig Snow, are also from the Winona Lake church.