A team from the Grace Brethren Church in Portis, Kan. (Dave Sarver, pastor), recently traveled to Bow Island, Alberta, as part of the Great Canadian Adventure, to minister with Island of Hope Church (Oliver Edwards, pastor). Yesterday, the Bow Island Commentator featured the group. A portion of the story appears below. Click here to read the complete story.

Missionaries from Kansas bond with Bow Islander over music 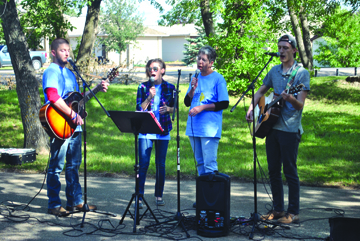 Adam and Ashley Bedient, and Kathy Conway, missionaries from Portis, Kansas, as well as Island of Hope Church intern Davyn Carlson, provide entertainment for Market in the Park.

Thirteen missionaries from Portis, Kan., came up to Bow Island recently to assist the Island of Hope Church.

Three of them realized they share a love of music with Island of Hope member Davyn Carlson, so they started to jam and ended up providing entertainment for the summer’s first Market in the Park, which happened to occur on Independence Day.

The two churches’ pastors met at a Grace Brethren Church conference and connected, since both are from small communities, although Bow Island is much larger than Portis, which has a population of just 98.

“Let’s just go connect and be encouraging to each other and just show the love of Jesus to people in both countries,” Kathy Conway, one of the Portis congregants, said of the decision to go on the mission to Bow Island. “It’s been an awesome week.”

The three bandmates from Kansas perform with their church’s music ministry.