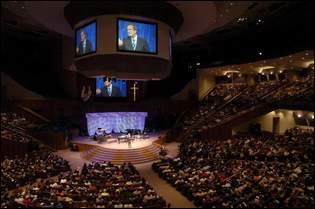 Bob Russell, longtime pastor of the massive Southeast Christian Church in Louisville, KY, announced to his congregation this past weekend that he and his associate are accelerating their long-planned transition of leadership. Reproduced here is a portion of an article–the full article (which is very instructive to churches planning a leadership transition) may be seen by clicking here:

Bob Russell announced last night that he is relinquishing the leadership duties of Southeast Christian Church to his chosen successor and confirmed that he will retire in June.

Russell, the church’s senior minister, has been gradually managing a transition to his longtime preaching associate, Dave Stone.

At a service last evening, however, Russell, 62, said he was speeding up the timetable and turning over day-to-day operation of Kentucky’s largest church to Stone. Among the duties Stone will assume are doing more of the preaching, setting policy and administering the church’s staff of approximately 400.

Russell, who expects to preach eight or nine more weekends, made his announcement at the first of four weekend services. He plans to speak to other worshippers today.

“I was concerned that the last six months of my ministry, I would be a lame duck as everybody sat around and waited for me to leave, and Dave would be a sitting duck,” Russell told worshippers last night. “This way the church would not lose momentum.”

The approximately 5,800 people attending last night gave a thunderous standing ovation to Russell, who in almost 40 years as its head led Southeast Christian from meeting in a house to its status as one of nation’s 10 largest churches.

“I joke and say the children of Israel put up with Moses for 40 years. Forty years is long enough for them to put up with me,” Russell said in an interview late last year.

In that interview, held jointly with Stone, the men talked of how the church planned for its future after Russell’s departure.

Russell and other church elders had agreed in 1999 on the transition to Stone, who has been preaching an increasing number of Sundays since joining the church staff in 1989.

Stone, 44, said he would follow much of the pattern set by Russell, whom he called “my hero and my mentor.”

He proposed the creation of satellite centers in other parts of Louisville and Southern Indiana, enabling some Southeast members to have activities and services closer to their homes.