Saldivar Recognized for “Behind the Scenes” Work 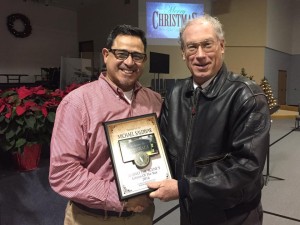 Michael Saldivar, left, was recognized by Pataskala, Ohio, mayor, Mike Compton, as a “Behind the Scenes Citizen of the Year” on Tuesday.

Michael Saldivar, pastor of Grace Church, a Grace Brethren church in Pataskala, Ohio, was recognized on Tuesday by Pataskala mayor, Mike Compton, as a “Behind the Scenes Citizen of the Year.”

According to Margaret Saldivar, Michael’s wife, “The mayor honored pastors of four churches in the community who regularly come alongside him in prayer and support and are active in community events.”

Michael’s award was presented at yesterday’s Chamber of Commerce meeting, where he serves as a board member, because he wasn’t able to attend Monday night’s city council meeting when the awards were announced.