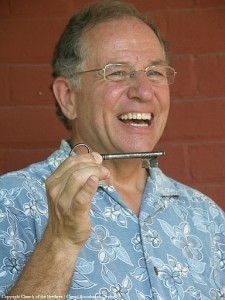 Paul Roth is a leader in the movement to preserve the John Kline Homestead. He is shown here holding the key to the front door of the historic John Kline home in Broadway, Va. Photo by Cheryl Brumbaugh-Cayford

A Broadway, Virginia ,homestead that once belonged to Brethren Church Elder John Kline has been sold to a group that plans to preserve it.

Board of Directors President Paul Roth says the trust plans to use the property to teach visitors about Kline and the Brethren Church’s heritage.

He was fatally shot in 1864 by Confederate irregulars while returning from the church’s annual meeting in Indiana.

A John Kline Homestead Preservation Trust was created in 2006 in hopes of preserving and eventually being able to purchase the home of Elder John Kline, a leader of the Brethren during the Civil War and a martyr for peace. The homestead is in Broadway, Va., near Linville Creek Church of the Brethren where Roth is pastor.

According to news reports from the Church of the Brethren, this fall the homestead has hosted a number of events both to encourage the raising of funds and to highlight the peacemaking witness of Elder John Kline as a key anniversary of the Civil War approaches in 2011.

“We just completed our third Candlelight Dinner in the John Kline house with 88 guests enjoying a traditional homemade meal and the conversations of people who lived in the house sharing their concerns about the rumors of war in the fall of 1860,” Roth reported. Actors played the parts of people who would have lived and worked in the house at that time. An actor playing John Kline “read from his Jan. 1, 1861, diary entry, fearing the impact of secession and war upon his family and congregation,” Roth said.