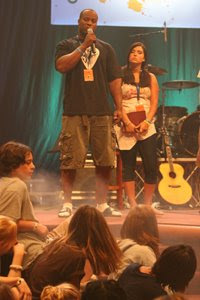 For human reasons, Je’Rod Cherry probably shouldn’t want to part with his Super Bowl ring. It’s an honor to own one, it represents the struggle of his team to achieve a spot in football history, and it also signifies a personal career high.

But he’s decided to put it up for raffle to benefit needy children around the world.

Je’Rod (pictured at right with his wife, Samua) was a safety on the New England Patriots team that won three Super Bowl games within four years. Each time, team members, coaches, and staff received unique rings to commemorate the occasion.

His first ring, received in 2002 following the team’s 20-17 win over the St. Louis Rams in Super Bowl XXXVI, is his favorite. (He also has rings from Super Bowls XXXVII and XXXIX.)

“I had a huge impact on the game,” he recalls. Indeed, he recorded a game-high three solo special teams tackles, including dropping Rams punt returner Dre’ Bly for a one-yard loss. He also remembers that there was a greater struggle for the team to get to the Super Bowl, having been an underdog much of the 2001 season.

But now he’s ready to give it up for a higher cause. Je’Rod was in the audience at Momentum East, the annual Grace Brethren youth conference, when students and staff were challenged to give sacrificially to help feed starving children. By the time the conference was over, participants had given more than $94,000 to provide 100,000 meals for children in third world countries, build an orphanage in Cambodia, and replace the roof at Urban Hope (an inner city Philadelphia ministry), with enough left over to go towards a second orphanage in Thailand.

He knows he felt the spirit of God move that night in the auditorium at Cedarville University. After the service, he began walking out of the auditorium. “I was wrestling with finding some way to help with the building of an orphanage,” he recalls.

Friend and CE National staffer, Courtney Cherest saw him along the way and asked, almost in jest, if he was going to sell one of his Super Bowl rings. “I just may,” was his quick response, he recalls. But by the time he caught up with his wife, Samua, and they headed to meet with their youth group, he realized he’d been prompted, not by Courtney, but by God, to sell a ring. The proceeds would help the students at Momentum build and support a second orphanage in Southeast Asia. She quickly confirmed his decision.

He plans to offer the ring in a raffle this fall. He hopes to gain enough from the sale to benefit Asia’s Hope, enabling the completion of the second orphanage. Additional funds would go to Feed My Starving Children, a Christian organization that provides highly nutritious meals for severely malnourished children, and to other charities in the Boston area, where he played ball, and around his home in Macedonia, Ohio.

Looking back on the week, Je’Rod realizes that it was a divine moment. He hadn’t planned to attend the conference, but because the youth group at Grace Church, a Grace Brethren church in Macedonia, Ohio (Jason Haymaker, pastor), needed an additional man to accompany them, he offered to help. Samua, a volunteer youth staff member at the church, was already planning to attend. (The Cherrys are members of the church.)

“At first I didn’t want to go,” he remembers. It didn’t help that wasn’t a good time for him to take off from his job as a financial adviser.

But he realizes it’s an example of how God can change a man’s heart and perspective, admitting that even a year ago, he would not have wanted to part with the ring. “It was a personal pride issue,” Je’Rod remembers. Now he’s ready to use it as a way to raise funds for the greater good of society.

“I hope to raise enough money to bless a bunch of people in God’s name,” he says.