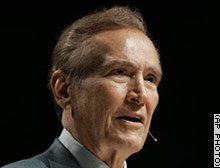 Adrian Rogers, the three-time president of the Southern Baptist Convention widely credited with being the leader of a conservative resurgence in the SBC, died early Tuesday in Memphis. He was 74.

His death was announced by Baptist Press News and by Rogers’ Love Worth Finding ministry.

Rogers was elected president of the SBC in 1979 as part of the conservative repositioning of the denomination.

His election turned out to a be a watershed moment for the denomination, and the 16-million-member group shifted dramatically to the right politically and theologically.

In the years that followed, conservative leaders pushed hard against abortion rights, homosexuality and women pastors.

He was pastor of the 28,000-member Bellevue Baptist Church in Memphis for 32 years, retiring this past March.

“There’s no one in this country I respect more than Adrian Rogers,” Focus on the Family’s Dr. James Dobson said on Rogers’ last day as pastor. “You draw me to Christ. When I’m with you, I feel closer to the Lord.”