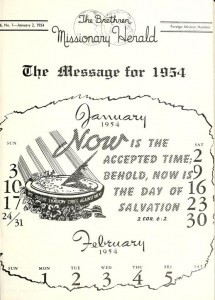 The 1954 edition of the Brethren Missionary Herald, along with others, are now available on the Internet.

Scanning for the Brethren Digital Archives has begun and among the first publications to be completed are issues of the Brethren Missionary Herald magazine and Grace Theological Journal. They may be accessed at http://www.archive.org/details/brethrendigitalarchives.

When complete, the Archives will include a digital copies of publications produced by the various Brethren groups that trace their spiritual heritage to Alexander Mack. Publications slated to be digitized include periodicals from the mid- to late-1800’s as well as theological journals, such as the Grace Seminary Journal, which was published from 1980-1991, and denominational magazines, such as the Brethren Missionary Herald, which was published from 1940 until the mid-1990’s.

They have partnered with Lyrasis, the nation’s largest regional membership organization for libraries and information professionals, to see the venture completed. It is hoped to scan 22 periodicals and 10 almanacs that are attributed to the Brethren movement as part of this first phase.