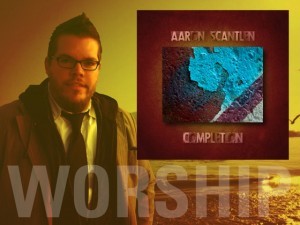 Aaron Scantlen, who is on the staff of Winona Lake (IN) Grace Brethren Church, is currently inviting participation in the funding of his first worship album.

In 1997, Aaron was asked to audition to be the lead singer of The Channelsurfers  (Organic Records, Portland, OR), and this began his journey in the Christian music industry. Since then, he has sung background vocals for Mandisa, Toby Mac, Kirk Franklin, Nicole C. Mullen, Natalie Grant, Pocket Full of Rocks, Michael McDonald, Michael Card and many more.

Scantlen was also a member of fleau, a trip hop band based out of Raleigh, NC. But Aaron’s greatest love has always been worship music, both in concert and in the church. He has been leading worship teams for more 20 years and has just completed writing his first full album of worship and praise music.

Scantlen says, “In the past, I’ve tried to do everything by myself, because I was afraid to bother people with my music. But God has been working on me to allow others to share in the process and help write, produce, record, market, fund and make this album happen!”

Scantlen says he has written more than 60 songs since July of 2011 and has selected the best seven of those songs along with what he describes as, “my three best worship songs from the last ten years.” He says, “I am also very excited to record two of Jeremy Byng’s songs (Grace Community Church, Goshen, IN).” Currently 12 tracks are completely written and ready to record.

Scantlen says there are three ways people can help. The first is to pray. “This isn’t just an album of music,” he says. “It’s songs written specifically for use in the church. It’s our hope that people are drawn to how AWESOME God is by the scripture and lyrics in these songs. And we hope that those outside of the church would also be drawn to Christ through the music and words and come to know Him! So we need Christians to pray.”

Second, he says, is the need for everyone who cares about this project to tell their friends and neighbors. “Share the video on Facebook. Email the link to your friends. Talk about it at church. And tell your worship leader to check it out. Maybe they will find a new song to lead at your church!”

And finally, he invites people to participate in helping to fund the album. His initial goal of $5,000 in funding, through Kickstarter, has already been met.

Pointing out that, “On a record label, the budget would be $15,000 – $50,000,” Scantlen says, “actually we would love to get $7,500. This would allow us a little more time in the studio for each song. We have to hire four main musicians as well as approximately six featured artists/musicians. We have to pay for 2-3 weeks of studio time for recording, mixing and mastering at T. Bush Recording Studio. There is the cost for pressing the CD in a cool eco-wallet package, as well as incidentals such as photography, web site, t-shirts, wristbands and other miscellaneous costs. This stuff adds up quick!”