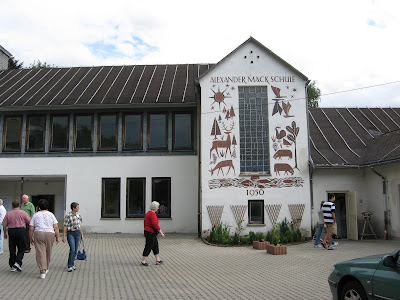 The following information was released this week by the Church of the Brethren communications office:

The following new resources have been published as part of the
celebration of the 300th Anniversary of the Brethren:

“Back to Schwarzenau: Celebrating 300 Years of the Brethren
Movement”: This video wrapup of the international celebration of the
300th Anniversary held on Aug. 2-3 in Schwarzenau, Germany, has been
produced for the Brethren Encyclopedia Board by David Sollenberger.

The video is available in DVD format and offers highlights of events as
members of the six major Brethren bodies returned to their roots on the
banks of the Eder River, where the first eight Brethren were baptized in
1708.

The DVD contains a narrated 12-minute overview of the gathering,
a three-minute collage of images from the weekend, the sermons from
the Anniversary worship service, the McPherson College choir singing
the anthem commissioned for the 300th Anniversary, a presentation by
Larry Glick as Alexander Mack Sr., and a video tour of the Alexander
Mack Museum.

“Schwarzenau 1708-2008”: A new book about the relationship between
the village of Schwarzenau and the Brethren has been released in
German and English. The book has been edited by Otto Marburger, who
served as a co-coordinator of the Schwarzenau Committee for the
international celebration of the Anniversary.

Identifying the village as the birthplace of the Brethren, authors from Schwarzenau and the Bad Berleburg region as well as from different Brethren bodies contributed to the book. Proceeds will support the Alexander Mack Museum in Schwarzenau. Order through Brethren Press for $25 plus shipping and handling, call 800-441-3712.