As Southview Grace Brethren Church in Ashland, Ohio (Mark Abel, senior pastor), marks its 20th annual Wifflefest, the event is being featured in the Ashland, Ohio, Times-Gazette. Below is a portion of a third article in a series of three, which was published on June 28, 2019. Click here to read the complete article. 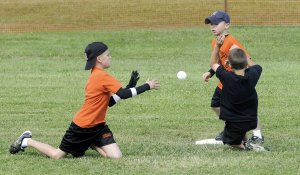 Editor’s note: This is the third of a three-part series on Wifflefest, in honor of the event’s 20th anniversary.

Across the country, many people associate fireworks, cookouts and the American flag with the Fourth of July. Members from the Ashland community, though, will likely add wiffle ball to that list.

That’s because since 1999, the local wiffle ball tournament known as Wifflefest has been a tradition during the week of July Fourth on the property of Southview Grace Brethren Church in Ashland.

Wifflefest will be celebrating its 20th anniversary this year, as Pastor Mark Abel has been organizing the event for two decades with the help of registration coordinator Elaine Hess and several other members of the church.

“Twenty years ago, we didn’t think it would become this,” Hess said. “In a town like Ashland, where family is important and community is important, it is neat as a church to be able to meet people where it is just good, clean fun.”

Since its beginning, Wifflefest has developed into an annual event that is on par with other big local events, such as Balloonfest.

“For me, this is something that I believe has brought glory to God in the sense that it has united a church and it has changed the reputation of our church,” Abel said. “It’s great to know that I’m a part of that. It is very fulfilling.”