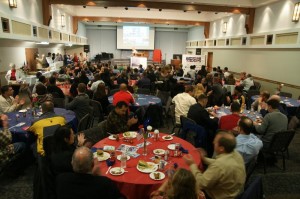 The Grace Brethren church in Seal Beach, Calif. (Don Shoemaker, pastor), Grace Community Church of Seal Beach with the Seal Beach Chamber of Commerce, City Officials, the Lions and Leo Clubs, O’Malleys Restaurant along with Support Our Troops hosted the USS Dewey crew for dinner at the church building on Monday, March 1, 2010.

The USS Dewey was commissioned at the Seal Beach Naval Weapons Station on Saturday, March 6, 2010.

USS Dewey is an Arleigh Burke-class guided missile destroyer in the United States Navy. Dewey is the third Navy ship named after Admiral of the Navy George Dewey, hero of the Battle of Manila Bay during the Spanish-American War.

She was authorized on 13 September 2002 and was built by Northrop Grumman Ship Systems. The keel was laid down on 4 October 2006 at the company’s shipyard in Pascagoula, Mississippi.

On 26 January 2008, Dewey was christened in a ceremony in Pascagoula, by Deborah Mullen, the wife of Admiral Mike Mullen. Dewey was commissioned in Seal Beach, California on 6 March 2010, as the 55th Arleigh Burke-class destroyer. This is the first ship commissioning for the City of Seal Beach. (photo courtesy of Vicki Barilla)