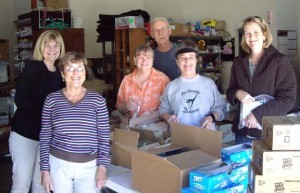 May 2010 packing team, co-coordinator Judy Hull on the left

This November brings the first Veterans’ Day in seven years with no American servicemen or women in combat. Yet while combat officially drew to a close in August, more than 50,000 troops remain in Iraq alone. A small ministry at Grace Community Church, a Grace Brethren church in Seal Beach, Calif., continues to stand behind those still deployed, as they have since 2001 when troops were first sent out.

Support Our Troops is a small service team working under the wing of Grace Community (Donald Shoemaker, pastor). The volunteer group gathers and sends consolidated shipments of letters and care packages to military personnel overseas. According to the church website, their goal is simply to “provide encouragement” to soldiers, sailors, airmen and marines. “We serve troops in far places and hazardous situations,” says coordinator Ed Hull.

The ministry began eight years ago when Grace Community members Laurie and Curt Fulton “saw the need early on to let our soldiers in Iraq and Afghanistan know that we support and honor their service.” Last year the Fultons moved to northern California, and fellow church members Ed and Judy Hull stepped up as the ministry’s new coordinators. The transition caught the Hulls at a good time: Ed was just wrapping up involvement in another ministry, and both he and his wife were between full-time jobs.

Today the ministry supports five units, most of which come from the nearby Southern California area. Support Our Troops starts by initiating contact with each unit, generally through its local deployment team or through contacts at the Joint Forces Training Base nearby in Los Alamitos. 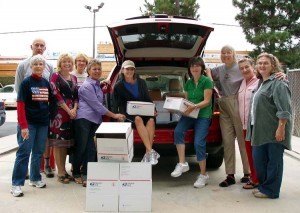 The team then collects letters from schoolchildren, phone cards, lipbalm, gum, and any of “the kind of stuff you would need in a hot desert environment” for individual packaging. The packages are then boxed together and shipped to a unit, which may receive some 200 packages in as many as 50 boxes in a single delivery. The response is “always positive,” Ed says, and is the beginning of a relationship between the organization and the unit. Troops often send photos of themselves with the boxes, as well as requests for future shipments. Ed says one of the more popular requests is for crew socks: “lots of crew socks.”

But the organization’s affiliation with Grace Community Church makes it more than that—it makes it a ministry. Besides granting Support Our Troops nonprofit status—a perk for donors, since contributions are therefore tax-deductible—the church gives the team its most consistent assistance.

Church volunteers help bolster the organization’s 31 active members by serving as seasonal assistance for special events, and church giving adds to the donation pool for Support Our Troops. The group collects, on average, several hundred dollars in donations each month, but this amount can fluctuate depending on “the plans we advertise to our congregation,” Ed explains. “The church leadership encourages us as a ministry.”

From the soldiers’ perspective, Support Our Troops becomes a distinctly Christian ministry because the hands they receive the packages from are acting as part of the body of Christ. Unit chaplains are the primary point-of-contact for distributing the shipments, so small gifts—from sunblock to Slim Jims—become a cup of water given in Christ’s name, from a church in California to a soldier overseas.