Sean McDowell Presents Evidence for the Bible: The Bible 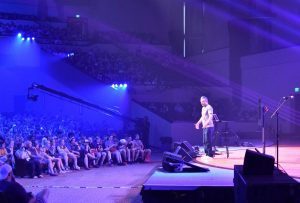 Sean McDowell, during the evening session of Momentum on July 18, taught 2,303 students, church volunteers and staff the reasons Christians have to defend the Bible.

“Don’t you think…you should have some good reason to believe it is true?” McDowell asked the crowd.

McDowell’s father, while in his twenties, set off on a journey to disprove the Bible. Instead, he found mountains of evidence proving it to be true. Sean follows in his father’s footsteps, researching and teaching apologetics at Biola University, La Mirada, Cali.

There are three tests historians use to determine if a text is what it claims: composition, companion, and corroboration. McDowell reviewed how the Bible passed each test. With all the evidence from historical literature and a “tsunami” of recent archaeological evidence, McDowell wrote an article and updated his father’s book Evidence That Demands A Verdict.

McDowell’s father, Josh, told him that during his search, what convinced him wasn’t the facts, but the content of the book. The message of love and forgiveness won him over. McDowell pointed out that the truth is there in the Bible, however, it is the resurrection story that makes a difference in people’s lives.

“Let the truth of scripture transform us first,” he said.