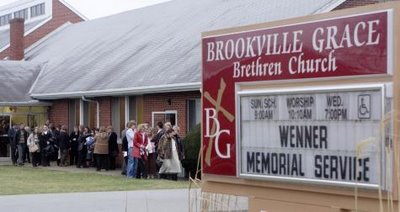 BROOKVILLE — An unseasonably warm sun broke through the rain clouds for an hour Sunday afternoon as hundreds of mourners gathered to remember the lives of Craig and Patricia Wenner.

But as family, friends, and colleagues paid their last respects and filed out of Brookville Grace Brethren Church on Westbrook Road, a steady rain returned.

“They will always be with us,” Pastor Dale Harris said.

Every seat in the church was filled as Dolly Parton and Vince Gill’s rendition of “I Will Always Love You” played in honor of the couple.

Friends and family reflected on the lives of the couple who died a week ago on Christmas Day after Patricia Wenner entered the Stillwater River to save the family dog.

The couple and their two teenage daughters were walking in Englewood Metro Park. Craig Wenner, a Five Rivers MetroParks project manager, tried to save his wife, but was also overcome by a fierce current just below a low dam.

Efforts to find the bodies of the Wenners, both 50, tapered off Sunday after a week of intense recovery work.

“We’re just doing periodic checks along the banks there,” MetroParks Chief Ranger Larry Jones said. So far, only the dog has been found.

Officials might set up another rescue task force next weekend to comb the river, but for now they’re watching and waiting, Jones said.

A college fund has been established for the Wenner’s two teenaged daughters, Carolyn and Sara. Donations can be made to Montgomery County Credit Union, 409 W. Monument Ave., Suite 105, Dayton, OH 45402.