Last week, a story on the online news site, InkFreeNews, featured Josh Neuhart, award-winning sports information director at Grace College. A portion of the story appears below. Click here for the complete article.

Quietly One of the Best in the Biz 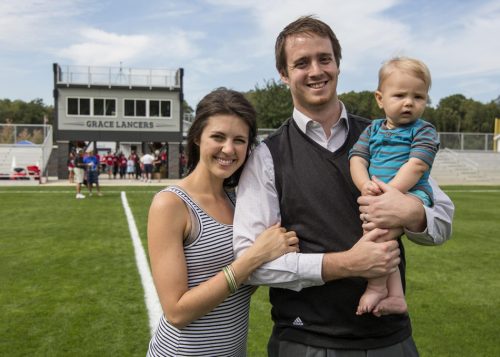 Josh Neuhart poses with his wife, Megan, and son, Gideon, at Miller Field on the campus of Grace College.

In many cases, you won’t even know he’s up to his ears in busy work. He doesn’t often let on about his workload, his responsibilities, or the fact that he’s darn good at what he does overlay his extremely welcoming and comforting approach. But you’ve likely seen what he does, and come back to it again and again.

His office is covered in tiny notes, written in about a three-point font size smashed into even smaller idea patterns. Twitter thoughts, photo angles he hasn’t tried yet, slogans for shirts and social media rallying cries. And the website, oh the website, his ideas tend to have a slightly larger font with more bullet points. The work of Josh Neuhart as sports information director at Grace College isn’t as anonymous as his myriad of tiny notes, but he’d like you to think it was.

“One thing that I have learned about a lot of Chad’s (Briscoe, Grace College athletic director) leadership, he always stresses we are here to serve other people,” Neuhart said in taking a moment from his busy day outside his office at the Manahan Orthopaedic Capital Center on the campus of Grace College. “People don’t always know what we’re doing, where the pictures come from, where the stories come from, how the website is updated. They just want to see them. And if they don’t see them, they’ll tell my boss they want to see them.

“I’ve never really worried about my name on a byline, or my name on a photo. That’s OK. Chad’s always stressed service, and I believe in that. If people don’t notice us doing what we do, that’s a good thing.”

Neuhart and his mighty staff of himself – but to be fair also includes student aides and the higher end of the triangle in athletic secretary Kelly Sharp and Briscoe – have built themselves quite a marketing machine in Winona Lake. Neuhart has overseen the complete overhaul of Grace’s athletic website to become gclancers.com, which in just four months of existence was voted the top NAIA college athletics website in the country.