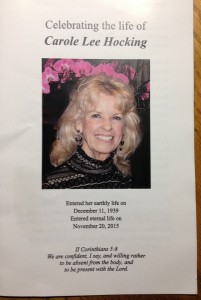 Funeral services for Carole Hocking were held yesterday (December 1, 2015) in Santa Ana, Calif., who died on November 20. She was the wife of David Hocking, former Grace Brethren pastor in Southern California. Her obituary is below:

Carole was born on December 11, 1939, and became a committed believer in Jesus Christ in 1961. She had two sisters — Beverly (who is with the Lord) and a living sister, Wanda Partain (in Yucaipa, Calif.) and a living brother, Richard McCollum (in Fresno, Calif). She was raised by Roy and Mary McCollum in Cherry Valley, Calif.

David and Carole first met in Indiana — Carole was attending Grace College in Winona Lake, Ind., and David was a student in Grace Theological Seminary. They were married on August 23, 1962, enjoying more than 53 years together.