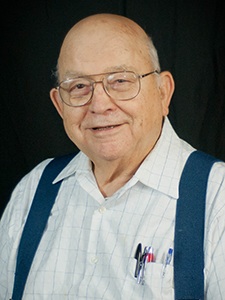 Dr. Fink died Saturday, September 7. He  was professor of homiletics and pastoral theology at Grace from 1963-1979 and served as interim pastor at various Grace Brethren churches in Virginia over the years.

To view photos of Dr. Fink’s life, to leave a memory, or to express condolences, click here.

His obituary appears below:

Dr. Paul Richard Fink, 83, of Madison Heights, went home to be with his Lord, Saturday, September 7, 2013, at Lynchburg General Hospital. He was the loving and devoted husband of Mary Louana Allen Fink for sixty-two years.

Born February 6, 1930, in Tucson, Ariz., he was the son of the late Louis Phillip and Sula Frazier Fink and was also preceded in death by three brothers, Lloyd, Louis, and Glenn Fink. Dr. Fink was the Director and a Teacher of the Amherst County Bible Institute in Madison Heights, retired College Professor with the Liberty University School of Religion and Grace Theological Seminary in Winona Lake, Ind., and was a U.S. Navy veteran of the Korean War. He was a member of Grace Baptist Church in Madison Heights and also the Patterson Memorial Grace Brethren Church in Roanoke.

A funeral service will be conducted 11 a.m., Wednesday, September 11, 2013, at Thomas Road Baptist Church with the Rev. Jesse D. Truax and the Rev. Dan Lee officiating. Interment with military honors by American Legion Post 16 will follow at Fort Hill Memorial Park. The family will receive friends from 6 until 8:30 p.m. Tuesday, September 10, 2013, at the Welcome Center on the campus at Liberty University.

Those wishing to make memorial contributions are asked to consider the Liberty University School of Religion.