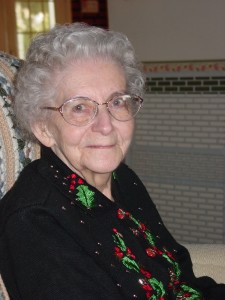 Funeral services for Emma Fretz, widow of the late Walter Fretz, who served as director of the Grace Brethren Investment Foundation in the 1970s and 1980s, will be held October 23 in Telford, Pa. Further information, along with her obituary, appears below.

Born in Smedley, Va., she was the daughter of the late James and Anna (Cassel) Jones. Emma graduated from the former Lansdale High School, 2nd in her class. She then became a Registered Nurse, graduating from Abington Hospital School of Nursing. She lived with Dorothy Wolf and family in Lansdale and went to Hatfield Church of the Brethren.

Emma and Walter began housekeeping in Souderton, then moved to Hilltown Twp., where they raised their four children. They co-founded Penn Valley Grace Brethren Church, Telford, Pa. Emma was active in the leadership of WMC, Women’s Missionary Council, both locally and nationally. In 1972, they moved to Winona Lake, Ind., where years later they co-founded Lakeland Grace Brethren Church, Warsaw, Ind.

Emma began and pursued an interest in decorating a wide variety of eggs. She was well known nationally for her artistry, in the world of Egg Crafting and was willing to share her knowledge and skills with others. When conducting egg shows, she integrated creativity, God’s Creation and sharing the Gospel. She also had a serious interest in gardening and all sorts of crafts, including quilling and cast plastic. In her later years at Grace Village, she engaged others to read the Bible to her, hoping they would be influenced by what they read.