Funeral services for Mary Thompson, who died on December 5, will be at 11 a.m. Friday, December 11 at the Winona Lake, Ind., Grace Brethren Church. Visitation will be from 5 to 7 p.m., Thursday, December 10, at Redpath-Fruth Funeral Home, 225 Argonne Road, Warsaw, Ind. Mary served in ministry in Grace Brethren churches and organizations alongside her husband, Raymond “Bud” Thompson, for many years. Her obituary appears below. 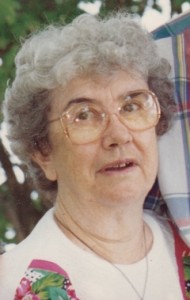 She was born on Dec 10, 1922 in Whittier, Calif., to Royce W. Schultz and Ferba Agnes (Summe) Shultz-Whittenberger. Both of her parents had spent their childhood years in the Claypool and Silver Lake, Ind., area and had moved with their families to Southern California in the early 1900’s.

On June 14, 1947, Mary was married to Raymond Walter “Bud” Thompson, and they shared a full life together until his death on September 26, 1993. Mary attended the Bible Institute of Los Angeles, now Biola University, and began her working life as a secretary at an insurance company. When their family was young, Bud and Mary moved to Winona Lake, Ind., where Bud earned a Master of Divinity degree from Grace Seminary. Upon graduation from seminary, they served at churches in Modesto and Bellflower, Calif., before returning to Winona in 1967 when Bud took a job with the Grace Brethren Foreign Missions office. During the next few years Mary worked as a writer and editor for the Free Methodist Headquarters. They completed their careers by serving eight years with the Grace Brethren Navajo Mission in Counselor, N. Mex., before their retirement and return to their home on the Island in Winona Lake.

Whatever the title or the role, Mary was always involved with children. She taught them, raised them, wrote and cooked for them. She was a mentor, a friend, and a faithful example who will be missed by many people who look forward to seeing her again, healthy, vibrant, and laughing. Mary had been a member of the Winona Lake Grace Brethren Church since 1967.

She was preceded in death by her parents, husband, one son, and one daughter.

Memorial gifts in Mary’s name can be given to the Encompass World Partners, P.O. Box 3298, Monument, Colo.  80132, and designated to Montceau (France) Evangelism Fund.