Serving God by Serving Others 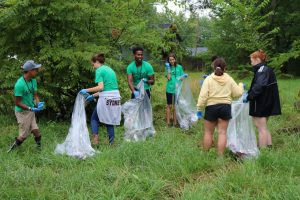 Students from Warsaw, Ind., picked up trash in a vacant lot.

“I don’t like doing yard work, but it’s not me doing this. It’s God,” said Andrew as he pulled weeds in downtown Marion, Ind.

He was part of a team from Norwalk, Calif., and students from Momentum Youth Conference who had spread across north central Indiana on Saturday to perform acts of service at approximately 60 different sites.

“I want to show the love of Christ to the community by doing small things,” added Megan, also from California.

In the Hope neighborhood, Rose Pope, past president of the neighborhood association watched with appreciation as a group of young men from Akron, Ohio, picked up trash around the working class community.

“There is more trash being accumulated by the residents,” she noted. 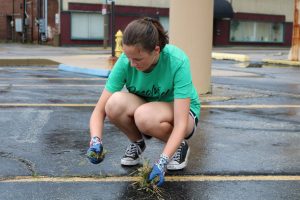 The rainy day made weeding in downtown Marion much easier.

“I really want to help people,” said Micah as he worked a few steps from Pope’s home. “It’s a good opportunity to show that we care.”

Josh was also picking up trash on the same quiet street. He called it a “private discipline,” helping others when no one else sees it.

“While no one is looking, God is,” echoed his friend, Dillon.

A few blocks away, a group picked up trash on a vacant lot.

“It’s a great way to show Christ throughout the community,” said Audrey, from Warsaw, Ind. “It’s not my community, but it’s a community,” she added as she enthusiastically waved at a car, hoping it would stop so she could pray with its occupants.

“It’s cool that we can help in this neighborhood,” said Jacob. “We are showing the love of God.” 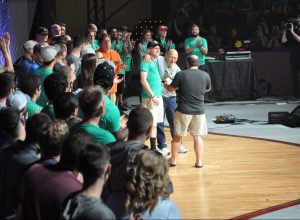 Lee Seese, Johnstown, Pa., was recognized with the Faithfulness Award. 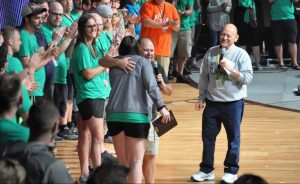 The Momentum students fanned out in a 150-mile radius from the Marion, Ind., campus of Indiana Wesleyan University, where the conference is being held. While the rain canceled some activities, students still helped with trash pick-up, painting, chopping wood, and other acts of service from as far north as Warsaw and Winona Lake, Ind., to as far south as downtown Indianapolis.

The day began with a session in Chapel Auditorium in which CE National presented awards to several youth staff. They included: