Serving the Lord Where You Are 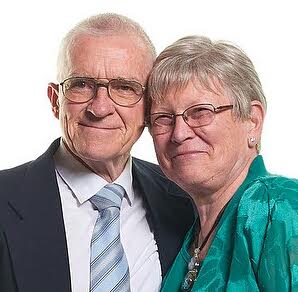 Finding contentment with certain situations is not an easy task, especially when one has been praying so diligently for what he or she seeks. It’s easy to forget that God has a plan and always will have a plan, that He will be on perfect time with His answers. It is tempting, then, to view everything that happens up until the prayer is answered as a waiting period. However, it is important to remember that the current situation we find ourselves in is where God wants us. For God, there is a time and a place for everything, and to fulfill this, He has no problem making us wait for the right time.

Edwin Jordan, pastor at Pleasant Grove Grace Brethren Church, a Charis Fellowship congregation in North English, Iowa, and his wife, Eloise, have served as an example to those around them by choosing to wait on God’s timing, no matter how long the waiting appeared to be. For both Ed and Eloise, it was never about waiting; it was about serving God right where they stood in their current situations.

Having never been married before, Ed and Eloise, after 32 years of friendship, decided to get married at the respective ages of 62 and 63 on March 29, 2008. For both as individuals, remaining single in their younger years seemed to be part of God’s plan.

“My earlier calling and work were more suitable to a single person,” says Ed. “I enjoyed my independence and was probably pretty well set in my ways.”

Ed and Eloise met in 1976 as both found that God’s call on their lives led them to Taiwan. Eloise worked as a teacher in a school for missionary children. After having served in Taiwan for two years with the U.S. Air Force, Ed returned there as a missionary.  During their time in Taiwan, Ed and Eloise began a friendship that would continue even after Ed returned to the U.S. in 1993.

“We enjoyed each other’s friendship for many years in Taiwan after we first met in 1976,” says Eloise. “We did many things together: attended the same church on Sunday, taught and English Bible Class together and conducted a Sunday morning service at one of the major hotels.”

While Ed returned to the states in 1993 eventually to answer a call in 2001 to pastor at North English (his childhood church), Eloise remained in Taiwan for another 14 years, concerned mostly with the fact that she loved her teaching job in Taiwan and felt that was where she needed to stay.

“I think that most females dream of getting married. I did too, but I loved what I was doing. Teaching missionary kids is what I had wanted to do since I was a child. I was content in doing that.”

Eloise remained in her teaching job in Taiwan until 2007, when she retired and returned to the states. However, before Eloise retired, on one of her trips to the states in 2006, she stopped to visit her long-time friend Ed in Iowa. At an airport coffee shop during that visit, Ed asked Eloise if she had ever thought about starting a new career as a pastor’s wife.

Eloise replied, “If you are the pastor, I might consider it.” So, after Eloise made her return to the states in November of 2007, the two were married the following March.

Ed and Eloise believe that they have experienced many benefits in their singleness and in their marriage by finding contentment in each stage of their lives.

“Marriage is not something to rush into,” says Eloise. “I was able to do many things that I enjoyed which I probably would not have been able to do if I had been married.”

To any newly married couples or singles still waiting for his or her spouse, Ed encourages, “delight in the Lord where you are, and seek to serve with what He has given you.” — by Lindsay Schuster

Click here to send a note of encouragement to Edwin and Eloise.

(Editor’s note: Lindsay Schuster is a senior at Grace College from Brownsville, Tex. She is an intern at GraceConnect this semester.)