Shakespeare at Grace to Bring Literature to Life 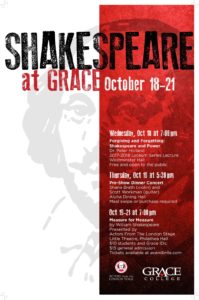 Shakespeare at Grace, a week-long series of events at Grace College, Winona Lake, Ind., will take place Oct. 18 – 21. The wide range of programs, including live theatre, lecture, and discussion, are sure to inspire and develop an appreciation for William Shakespeare’s renowned literature.

Shakespeare at Grace is organized by Professor of Literature, Dr. Lauren Rich, and the Grace College Languages, Literature and Communication Department. “During the week, we’ll celebrate the irreplaceable contribution Shakespeare made to literature,” said Rich. We will do this through annual events like The Lyceum Series as well as brand new events including performances by Actors From The London Stage,” Rich said.

The Lyceum Series is an annual event dedicated to merging cultural engagement, academics, and faith. This year’s installment is presented by Dr. Peter Holland, a world-renowned Shakespeare scholar, during Shakespeare at Grace. Holland’s lecture, “Forgiving and Forgetting: Shakespeare and Power,” will occur at 7 p.m, Wednesday, Oct. 18, in Westminster Hall, 105 9th Street, Winona Lake. The Lyceum Series lecture is free, open to the public, and will be followed by light refreshments and a book signing.

Holland is the associate dean for the arts at Notre Dame University. He is a respected editor and author of several books, including “English Shakespeares: Shakespeare on the English Stage in the 1990s” and a major study of Restoration drama, “The Ornament of Action.”

Actors From The London Stage (AFTLS), one of the oldest and most established touring Shakespeare companies in the world, will perform “Measure for Measure” by William Shakespeare in Grace College’s Little Theatre, located in Philathea Hall, 1499 Alpha Dr., Winona Lake. Performances will take place at 7 p.m. on Oct. 19, 20 and 21. Tickets are $10 for students and $15 general admission and are available through Eventbrite.

AFTLS is housed and workshopped in England with academic tours booked through the University of Notre Dame. AFTLS tours the country in the spring and fall, visiting almost 20 universities per year. The actors include Peter Pray, Ben Eagle, Dominic Gerrard, Wela Mbusi, and Anna Wright. Grace College is one of eight schools AFTLS will visit on their fall, 2017 tour.

Immediately following “Measure for Measure” on Saturday night, student-led Grace College Cinematic Conversations (GC3) will offer a panel discussion to delve into the play’s weighty content. “Our hope is that this time will create space for students to process and learn from the material offered by Shakespeare via AFTLS,” said Kirsten Mead, student body president and coordinator of GC3’s discussion.

GC3 is a Student Senate-sponsored club on campus led by student Caleb Dudeck. The club regularly meets to watch films and discuss their worldview and moral implications. Rather than allowing movie-watching to be a passive activity, GC3 helps students actively engage with the words, ideas, and images presented in film.

For questions about Shakespeare at Grace, contact Dr. Lauren Rich via email at richlg@grace.edu or call 574-372-5100.