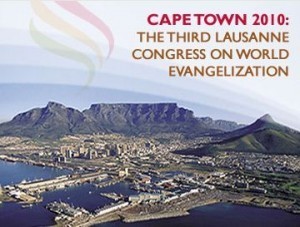 Among many other things, everyone with whom I talk shares a common commitment to 1) the authority of Scripture, 2) the uniqueness of Christ, 3) the lostness of man, and 4) our inescapable responsibility to share the Good News with every soul on this planet – as soon as possible.

This evening we honored the legacy of Billy Graham, the Father of the Lausanne Movement. It was his vision that rallied 2300 evangelical leaders from 150 countries in 1974 under the banner, “Let the Earth Hear His Voice.” As Graham declared in his opening address, “We here tonight stand firmly in the evangelical tradition of biblical faith”. Consistent with this claim he called upon the Congress to “reemphasize those biblical concepts which are essential to salvation;” namely, 1) the authority of Scripture, 2) the ‘lostness’ of man apart from Jesus Christ, 3) that salvation is in Jesus Christ alone, 4) that our witness must be by both word and deed, and 5) the necessity of evangelism for the salvation of souls.

Looking back over the thirty-six years that have passed since that historic meeting, we can identify at least three lasting legacies. First, the Lausanne Covenant emerged as the standard to define the doctrinal and practical priorities of the evangelical movement. Second, the mission world reprioritized itself around the command to reach all people groups, as opposed to mere countries. Missiologist Ralph Winter later observed that his speech on ethne before the Lausanne Congress was the most important twenty minutes of his career. Finally, since Lausanne I, evangelicals have made significant strides in learning to work together in pursuit of the Great Commission.

Sadly, for the most part the Grace Brethren Fellowship sat on the sidelines as the Lausanne Movement gained momentum. Having researched this period in our archives and by interviews, I see that our primary concern was fear of doctrinal compromise.

Today was the first full day of the Congress, and, appropriately enough, the theme was Truth. Speakers from a wide spectrum of cultural backgrounds and evangelical traditions emphasized that absolute truth really exists, and that it is incarnated in a person – Jesus Christ – as revealed through His Word.  Time and space don’t allow for an adequate summary of their challenges (mp3 downloads will soon be posted), but I will share a few of their more quotable observations:

People usually come to Christ to meet a need, and stay with Christ when they realize he is truth.

We must use our greatest cognitive energies to get across the truth of who Jesus is.

The day we lose the wonder of the Gospel, we have lost everything. – Ajith Fernando

In a world of transcendent values, the worth of a person lies in his ability to fulfill and function. Without absolute truth, might is right. – Carver Yu

Making the case for Christ is not shouting louder than the others. Truth is not a proposition; it is a Person. – Os Guiness

Clearly one of our greatest challenges today is how to proclaim Christ in a secular and pluralistic world. As claims to absolute truth grow increasingly unpopular, the true church will be called upon to endure ridicule and even persecution. But the foundation of our faith is based upon the eternal truth that “He is the way, the truth and the life.”

And speaking of persecution, the evening session was dedicated to prayer for the persecuted church. That includes the 200 delegates from China, who, at great personal expense raised all of the funds needs to participate in Lausanne III, only to be prohibited from participation at the last minute. May God comfort them once again. The most moving moment of the evening was the testimony of a young North Korean woman whose father was martyred for his faith. She has dedicated her life to returning to her homeland to fight for the spiritual and physical liberty of her people.

Personal reflection: I was only in Junior High School during the first Lausanne Conference, so obviously I didn’t participate in the debates or experience the fears that led our movement to the sidelines. And I want to be gracious with my spiritual forefathers. But today it seems incomprehensible that the Grace Brethren would pursue the Greatest Commission apart from the greater Body of Christ. May God forgive us if that thought ever crossed our minds. The urgency of the task and the love of Christ compel us to work together – The Whole Church taking the Whole Gospel to the Whole World. As was stated today,

“Lausanne is a global gift exchange.”

Today we were invited to look deeply into the brokenness of our world – the lonely child, the abandoned wife, the unemployed father, the elderly sick and dying; to explore the impact of wars, injustice and inequity. Arising from our group study of Ephesians 2, our theme was reconciliation: man to God and man with man.

Here are a few of the many quotable statements of this second full day of Lausanne III:

“There is more slavery today than in the time of Wilberforce.” According to U.N. estimates, there are 27 million slaves worldwide. Add to this number the 250 million Dalits of India, 250,000 of which are serving as temple prostitutes. “The ‘untouchables’ of India constitute civilization’s longest lasting slave system.” Their cry? “Bring to us the alternative society of the church of Jesus Christ.” – Joseph D’Souza.

“When Jewish and Palestinian believers look at one another and say, ‘I love you,’ the world will know the true power of the Good News of Jesus Christ” – the perspective of a Messianic Jew and a Palestinian Christian.

During the Rwandan Genocide, one million Tutsis perished in a 100 day massacre. Until that moment, Rwanda was considered the most Christianized country on planet earth. What went wrong (from an African perspective)?

1.      A lack of contextualization of Christian truth

2.      A non-holistic presentation of the Gospel (a sterile catechism not based on real life)

4.      An unhealthy relationship between church and state.

A perspective on the crisis in the Balkans from a Serbian believer (at my discussion table) who is currently serving in Montenegro, “I have found no organization that can bring us together to laugh and share joy outside of Jesus Christ” – (making reference to the failed attempts by the European Union, the U.N. and U.S. to promote peace in his region).

During the evening, our focus was on the Middle East. An Iranian leader shared that during Lausanne I (1974), they could only account for 500 believers in all of Iran. Since then, there have been more conversions that in the previous 1300 years. In his words, “Iran is the most open country in the world.” Of course, persecution is intense and repression is brutal.

Throughout the Middle East, the overall percentage of Christians is shrinking, due to immigration (spurred on by fear of persecution) and the high birth rate of Muslim families.

The mood today was much less ‘festive,’ as we considered the brokenness of a world dominated by sin and its effects. In the midst of universal pain, what is the role of the church? To what extent are evangelicals guilty of placing so much emphasis on the life to come that we can turn a blind eye to the here and now? I remember raising that type of question in a seminary class, and receiving a very simple answer. “Jesus,” I was told, “said ‘the poor you will always have with you.’” End of discussion.

It wasn’t until later that I found the rest of the verse, “and you can do good to them any time you choose.”

While true missionaries have always been committed to a Gospel in word and deed, I think we owe a debt to the emerging generation of young people who are challenging our often dualist approach to ministry. God created us as whole persons, and the true gospel impacts us holistically. Yes, like many I am concerned that the pendulum not swing to the other extreme. Yes, the emerging generation is making us uncomfortable with what at times appears to be an overemphasis on meeting physical needs. Like young people have always done, they are challenging many of our traditional categories and methods of doing ministry. But they are also the most globally connected and sensitive generation in history. They have grown up conscious of the reality that their world is broken. My prayer is that together we will find a God-honoring balance of ministry for the whole person in the real world in which God placed us.

A little more about our movement toward Lausanne:

Yesterday I reflected on the reality that, save for a few exceptions, the bulk of our movement chose to remain on the sidelines during much of the history of Lausanne. I certainly remember little to no favorable reviews during my formative years in college and seminary. But our movement toward the center of evangelicalism was encouraged and nurtured under the leadership of GBIM by my predecessor, Tom Julien, who was committed to leading the Grace Brethren back into the mainstream of the evangelical movement. At least four specific actions taken by Tom are worthy of mentioning here. First, he brought GBIM back into the Evangelical Fellowship of Mission Agencies (EFMA; now called The Mission Exchange). This opened the door for GBIM staff to develop personal and professional ties of fellowship with the leadership of other evangelical mission agencies, and marked the beginning of our reintegration on a national level. Second, he sent representatives to the Global Consultation on World Evangelization, held in Seoul, Korea, in 1995. This action sent a strong signal that we were committed to integration with evangelicals on an international level. Third, in 1997, Julien led the GBIM Board of Trustees to adopt a Comprehensive Plan that included the following Vision Statement:

A global movement of reproducing churches (World Mission Churches) faithful to the Brethren heritage who are aware of the significance of the times and thrust into the mainstream of the movement of the Spirit of God in the fulfillment of their mission.

Finally, during his fifteen year tenure as Executive Director, Julien actively pursued ministry partnerships with like-minded evangelicals and evangelical mission agencies. GBIM and the FGBC owe a great debt to this visionary leader, who weathered storms of criticism from some quarters and succeeded in bringing our movement into closer alignment with the global evangelical community.