What do you do when someone who is a part of your family is suffering? You suffer alongside them.

At least, that is what the Grace Brethren Church in Osceola, Ind. (Greg Serafino, pastor) did. When 30-year member Mary Keller contracted breast cancer in April of 2013, pastors Greg Serafino and Dave Knight sought to find a way to come alongside her with the entire congregation.

“Mary and her husband have raised their four kids alongside ours in our church for the past 20 years,” explained Serafino. “She has been ultra-involved in teaching our church family kids about how to serve and use their skills to spread the gospel and to minister to others in the church.”

After brainstorming some ideas, the pastors decided to shave their heads on a Sunday morning as a chance to publicly show support and love to the Kellers. The women of the church threw Keller a “chemo-flage” party – showering her with gifts of colorful scarves for her to wear once the debilitating effects of chemotherapy set in. 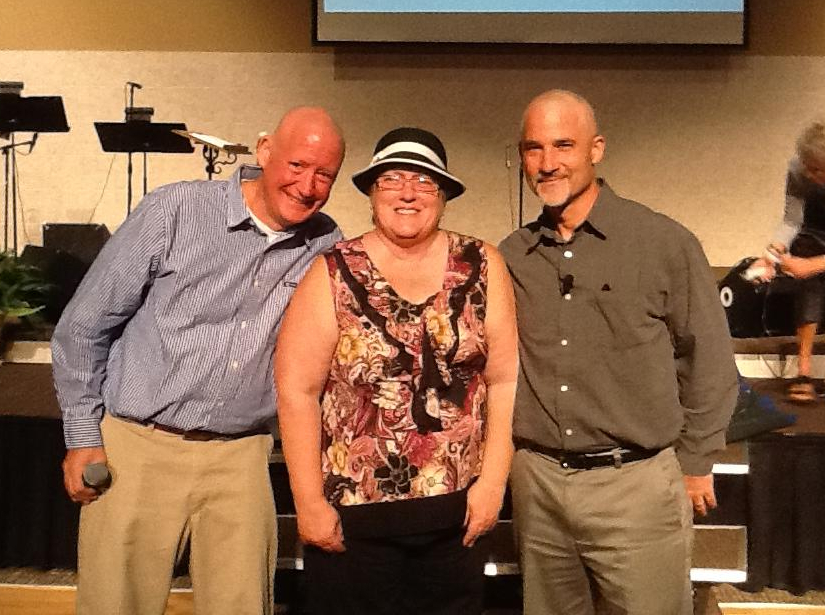 “We read verses while our heads were being shaved about coming alongside those who are hurting, loving means action, and mourning with those who mourn,” said Serafino (pictured at far right).  “Mary did not know that it was coming and she was so moved. It seemed like it could have been an interruption to our worship service but it was not – it was just the opposite – it was a step more toward worshiping together.

“Afterward I had several people say they were so moved that they almost stepped up to have their heads shaved also! In the following weeks, two ladies and two other men cut off all of their hair for the same purpose.”

“It has been neat to see our church family encourage her and her husband,” said Serafino. “I was actually hesitant at first, not because of shaving my head but because of the potential for the demonstration to draw attention away from her and toward us –making a big thing out of US doing this instead of what she was going through. However, I realized that this was a chance to show love, not draw attention to her or to us — but to show the love of God at work and the body of Christ working right.”

“I had no idea (the pastors) that they were going to do it,” said Keller about the Sunday morning event. “It took a few minutes to realize it was about me, but not really all about me. They had verses projected on the screen behind them about the body of the church supporting each other. I was so blessed by the action.”

“It has been a learning experience for me to accept help. I have come to greatly appreciate the amount of prayer and the number of prayer warriors in the church. To know that strengthens and encourages me more than words can describe. I am learning to be a better prayer warrior by what others have shown me.”

Keller had surgery in June of 2013 and finished chemotherapy and radiation treatments in January 2014. She is currently cancer-free, and is scheduled to undergo reconstruction surgery this June. Send her a note of encouragement at mkeller@phm.k12.in.us.