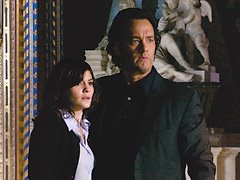 Could Hollywood really bring about the downfall of the Roman Catholic Church?

If the reaction of local moviegoers is any indication, it’s wholly unlikely.

“I think people are kind of blowing it out of proportion,” Chase Kramer said as he sat in front of Annville’s Allen Theatre on Friday evening, waiting for his chance to see “The Da Vinci Code.” “It’s a fictional story. It’s what you go to the movies for, entertainment. You don’t go to a movie to have religious beliefs thrown on you.”

With this weekend’s release of the much anticipated film version of Dan Brown’s best-selling novel, the Catholic church has renewed its efforts to battle the series of controversial claims about Christianity that the blockbuster has introduced to the masses.

“It sensationalizes an ancient heresy,” explained the Rev. John Douglas of St. Mark’s Lutheran Church in Annville. “If people believe what it says, it casts a lot of doubt on our faith.”

The biggest problem religious leaders worldwide have with Brown’s story are its claims about Jesus–including that he wasn’t actually the son of God and that he married and had children with Mary Magdalene–which they see as plainly untrue.

“Jesus was not married, didn’t have kids and didn’t survive the Crucifixion,” Douglas stated bluntly.

But, Shearer said, while some of the facts are off, there’s no reason for Christians to get bent out of shape.

“It is not Dan Brown’s intent to teach theology. It is his intent to entertain,” he explained, admitting that he had read and enjoyed the book. “I personally found it an interesting read. It was fun.”

The idea that “The Da Vinci Code” isn’t found in the nonfiction section of bookstores is something that Douglas said he has been working hard to promote.

“People need to remember that it’s fiction,” he said.

Douglas, whose church adheres to the teachings of the Roman Catholic Church, said that, while he doesn’t like the idea of a book or movie like “The Da Vinci Code” reaching the masses with its message, he plans to take it in stride and use it as a teaching experience.

“We’re saying it’s not OK, but we can respond to it,” he said, explaining that the church will screen a film titled “The Da Vinci Delusion” in the next couple of weeks. “Yes, it’s blasphemy and heresy, but that’s nothing new. The church has been dealing with that for 2,000 years.”

Shearer said he probably doesn’t have such strong feelings against “The Da Vinci Code” because his church is not associated with the Catholics.

“The book really goes after the Catholic church with the cover-ups and conspiracies,” he said. “I don’t feel we’re implicated at all.”

While Shearer does have a problem with Brown’s portrayal of Jesus, he said other parts of the book actually might be beneficial. Among those benefits are its unveiling of Opus Dei, an ultraconservative Catholic sect whose actions and motives have remained cloudy since the group formed early in the 20th century.

“I think the Catholic Church does have a history of cover-ups,” he said. “Exposure of Opus Dei, which has been very secretive from the beginning, and Roman Catholic cover-ups are valid questions to raise.”