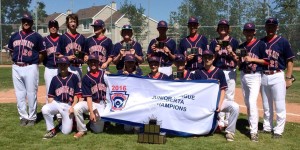 Silas Blair, son of Bart and Elizabeth Blair, is part of the Medicine Hat, Alberta, Junior League Baseball team, which is playing this week in the Canadian Junior National Tournament in Lethbridge, Alberta.

The teenaged son of Grace Brethren pastor, Bart Blair, is part of a team that is advancing in the Canadian Junior League Baseball tournament this week. Silas, 13, is the youngest on the team of 14- and 15-year-olds from Medicine Hat, Alberta, where his dad is pastor of Grasslands Church. Silas generally plays first base or is the pitcher.

The winners play for the national championship at 1:30 p.m. Thursday.

The champ advances to the Junior League Baseball World Series in Taylor, Mich., on August 14-21.

In a battle of undefeated teams from Alberta, Medicine Hat scored three runs in the top of the seventh inning to take a come-from-behind victory over Lethbridge 7-5 on Tuesday night.