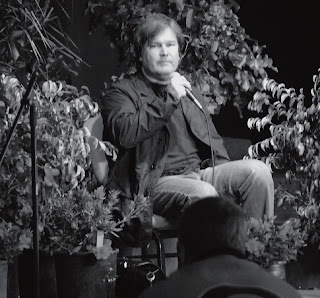 From the Simi Valley (CA) Acorn. John McIntosh is pastor of the sponsoring church, Grace Brethren Church of Simi Valley.

Gore Verbinski, the director of the three “Pirates of the Caribbean” films, came to Grace Brethren school to meet with the students in the Performing Arts Department.

Accompanying him was Raphael Sanchez, one of the camera and lighting crew directors.

Verbinski showed clips of his films and discussed the role of a director in film, as well as film production in general.

Sanchez said, “As director, Gore is the engine car of the train. Where he goes the whole movie follows, with all of its complex parts.”

Verbinski also answered questions to help the students understand how to succeed in the industry. “Hollywood is fickle,” he said. “There has to be a sense that this job is going to be your last. Do something that will challenge you personally and that you will be proud of.”

He also inspired the students to challenge themselves intellectually and creatively. “Mediocrity is like gravity, constantly pulling us down to it. We have to continuously challenge ourselves if we will succeed.”

Attending the seminar were the cast of Grace Brethren’s upcoming theatrical production of “The Curious Savage”; the drama, film and technological theater classes; and an alumnus attending film school at USC.