The football team at Grace Brethren High in Simi Valley, Calif., will honor one of their coaches tonight when they field. According to a story in yesterday’s Simi Valley Acorn, their helmets will spot a decal with a red number 89, the number first-year receivers coach Ryan Wetnight wore during his seven seasons playing with the Chicago Bears in the NFL. Wetnight recently began chemotherapy for an inoperable tumor in his stomach, but plans to be on the sidelines Friday night. A portion of the story appears below. Click here to read the complete article. Grace Brethren High School is a ministry of Grace Church, Simi Valley (Jordan Bakker, senior pastor). 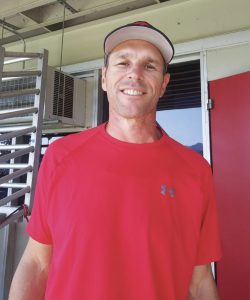 When Grace Brethren High’s football team takes the field Friday night against Westlake, the Lancers will have a new addition to their helmets.

It’s a tiny, black decal with a red No. 89, the number first-year receivers coach Ryan Wetnight wore during his seven seasons playing tight end with the Chicago Bears in the NFL.

The Lancers have dedicated the game to Wetnight, who found out three weeks ago that he has an inoperable tumor in his stomach. The tumor is nestled dangerously close to his spine.

Wetnight, who was treated for gastric cancer in 2018 before being deemed cancer-free in January of this year, started chemotherapy this week, on Sept. 24.

“It’s not fun, obviously, but I’m motivated because of these guys,” the 48-year-old coach said of his players. “With all my cancer issues and struggles right now, it’s been very difficult. To have the team behind you—and the school and community—is very motivating for me.”

While this round of chemo calls for Wetnight to receive medication for three straight days every other week for the next three months, he plans to be on the Grace Brethren sideline Friday night at Moorpark College against the Warriors, who are 1-4 overall. Wetnight lives in Simi Valley and works in real estate in Westlake.