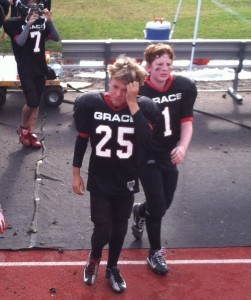 Grace Brethren: Led by coach Tom Costello, the Grace Brethren Juniors brought home the chapter’s first Super Bowl trophy. The game matched the Lancers against the Moorpark Packers. A rivalry in the making, this was the second time in two years the teams had met in the final game of the year. Grace Brethren came out victorious in last year’s Division 2 championship game. Both teams moved up to Division 1 this year and faced off early in the season, with Moorpark coming out on top in overtime. The game was dominated by defense with Grace Brethren holding Moorpark to 23 yards of total offense. Moorpark struck first after intercepting a swing pass and bringing it to the Grace Brethren 3-yard line. Three plays later, the Packers punched it in and took a 6-0 lead. The two-point conversion was stopped.

Read the rest of the story here.

Grace Brethren Youth Sports provides football, baseball, soccer for families desiring a Christian sports emphasis for their children. “At the football level we have five teams that compete with city leagues,” says John McIntosh, who recently retired after 29 years as pastor of the church. His grandson, Bradyn, was part of the team.