Simi Valley, Calif.’s, Grace Brethren High football team has continued to be honored after winning the sectional championship. Several members of the team took top awards in the All-CIF Southern Section Division 4. A story in the VC Star tells of the accolades, a portion of which appears below. Click here to read the complete story. Grace Brethren High School is a ministry of Grace Church, Simi Valley (Jordan Bakker, senior pastor). 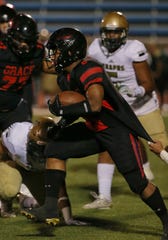 Grace Brethren running back Lontrelle Diggs was named the co-Offensive Player of the Year in All-CIF Southern Section Division 4.

After winning another sectional championship, the Grace Brethren High football team were rewarded by grabbing three top awards and having five other players earn all All-CIF Southern Section Division 4 honors.