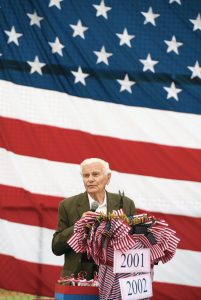 Today’s Simi Valley, Calif., Acorn reports on Tuesday’s observance at Grace Brethren School of the 9/11 terrorist attacks. A portion of the story appears below. Click here to read the complete article.

A giant red, white and blue rainbow greeted arriving students and parents Tuesday morning at the front gate of Grace Brethren School, where children took part in a tribute marking the 17th anniversary of the 9/11 terrorist attacks.

All across the private Christian elementary school campus, students had placed hundreds of small flags that declared, “We Remember!”

“The kids weren’t alive back then, but we don’t want that memory to die,” Grace Brethren Principal Matt Cooper said before the start of a morning assembly honoring the 9/11 victims, survivors and first responders.

The local school’s memorial service, which started and ended with a prayer, was one of countless ceremonies held across the nation Tuesday as Americans remembered what happened on Sept. 11, 2001.