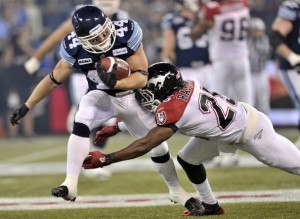 Chad Kackert tries to break free of the Calgary’s Keon Raymond during his Most Outstanding Player performance in Sunday’s Grey Cup. The Grace Brethren High graduate led the Toronto Argonauts to a 35-22 win.

Chad Kackert, a 2005 graduate of Grace Brethren High School in Simi Valley, Calif., has exemplified excellence in his work ethic, attitude, desire to serve others and lifestyle. Some people have seen that personally or through the impact on others. But many, many people have seen his excellence on the football field culminating in his MVP award in the 2012 Grey Cup. The equivalent of the NFL’s Super Bowl, Kackert seemingly came from nowhere to lead the team to the championship and receive the ultimate award in the process.

The school, which is a ministry of the Grace Brethren Church in Simi Valley (Jordan Bakker, pastor), will retire #27 from his All American years on the Grace Brethren Lancers. “Those of us that have observed him for years know that what he achieved was the result of how he lives,” said a Facebook post from the school.