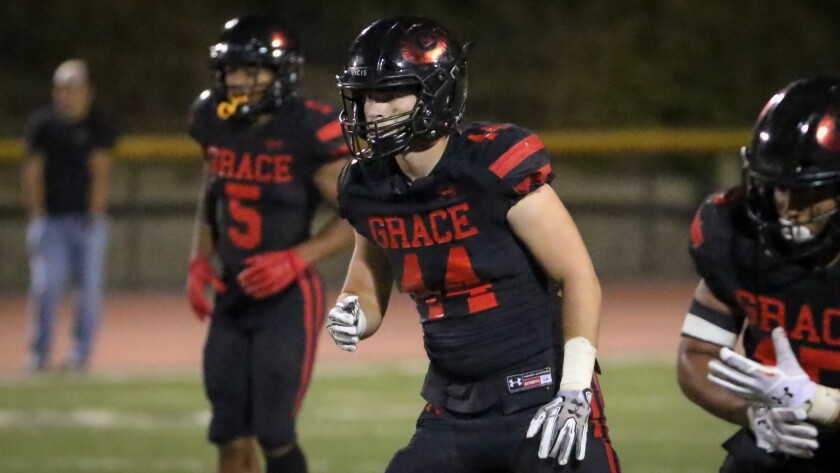 Josh Henderson is a bulldozer on the football field.

On a recent carry, a defender dived at the legs of a fullback in front of Henderson and tried to make a shoestring tackle. It caused the 6-foot-2, 200-pound senior from Simi Valley Grace Brethren High to run into the back of an offensive lineman blocking ahead of him, but Henderson wouldn’t go down. He redirected the run and went left.

Two Westlake defenders tried to pull him down from behind and a third from the front. Henderson lost his footing and nearly fell forward on his face mask, but he shook free putting his hand down in front to regain his balance. A fourth defender arrived. Henderson didn’t even have a chance to bring his head up. He ducked underneath. … Henderson has helped Grace Brethren to a 6-0 start, leading the team with 14 touchdowns. He is second with 549 rushing yards, averaging 8.9 yards per carry. He has a team-high 55 tackles, leads the Lancers with 11 tackles for a loss, including a team-best five sacks, and has an interception.

“It was really actually an unbelievable moment for me,” he said. “At first, I was like ‘Did this …? Is this really happening right now?’ Yeah. It was cool.”