Yesterday’s VC Star website commemorated the 70th anniversary of Eddie and Bette Osborne, who were instrumental in beginning Grace Church in Simi Valley, Calif. (Jordan Bakker, senior pastor). A portion of the story appears below. Click here to read the complete article and see more photos. 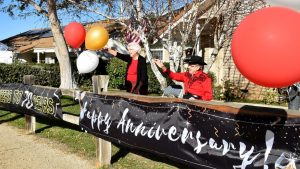 Red, gold and white balloons decorated the front yard of a house in Simi Valley Wednesday as dozens of cars drove by to take part in a celebratory parade.

The occasion? Bette and Eddie Osborne marked their 70th wedding anniversary this week, with over 60 years spent in Simi Valley.

Bette Osborne, 88, said the caravan had about 25 cars filled with friends and family members, including one driven by their great-grandchildren. She and her husband Eddie, 91, would have normally celebrated with a party, but the coronavirus pandemic caused them to rethink things.

Another important aspect of their lives in Simi Valley has been their faith. The Osbornes had been a part of the Grace Brethren Church while they lived in Anaheim, and once in Simi Valley they met two other couples who had been part of the same group.

The three couples began meeting for Bible study and other worship events, and eventually it grew into what’s now known as Grace Church of Simi Valley with hundreds of congregants. The associated Grace Brethren Schools have kept the original name.