The Grace Brethren High School Lancers to a 24-8 victory over Aquinas High School on Saturday night, giving them the CIF Division 2-A Regional championship. They will face on St. Francis (Mountain View) at Noon, Dec. 16 at Sacramento State’s Hornet Stadium. A portion of a report from the Los Angles Daily News appears below. Click here for the complete story. There is also photo report from newsrains.com here. Grace Brethren High School is a ministry of Grace Brethren Church, a Charis Fellowship congregation in Simi Valley, Calif. (Jordan Bakker, pastor). 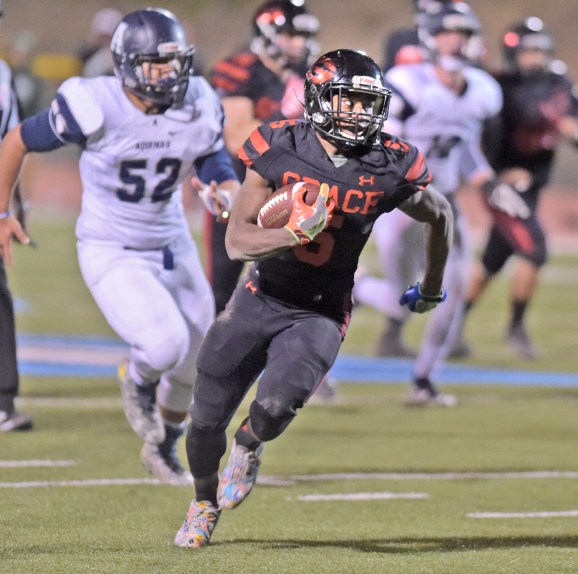 Grace Brethren running back Steven Mcgee takes the ball down to the 13 yard line to set up the first Grace Brethren touchdown during the CIF Division 2-A Regional Championship Bowl Game between Grace Brethren and Aquinas at Moorpark College in Moorpark on Saturday, December 9, 2017.

Henderson was the head coach at Aquinas High School for nine seasons from 2000-2008, winning two CIF titles in that span. One week removed from winning a CIF title with Grace Brethren, his heart was torn knowing his old program was in the way of a trip to Sacramento for a CIF State title.

“The primary goal of this game was to win, obviously, and we did that. But at the same time beating Aquinas doesn’t necessarily feel good for a lot of reasons, however, losing to them would have felt a lot worse,” Henderson said with a chuckle.

Henderson relished in a 24-8 victory over Aquinas, lifted the CIF Division 2-A Regional plaque, but was then smothered by former Aquinas players with smiles and hugs who traveled to Moorpark College to watch their old coach from the opposite sideline.

“It was 17 years ago on this date when I was at Aquinas and we won the program’s first CIF title in 2000,” Henderson said. “But now, I’m so excited for this Grace Brethren team to go to a state championship.”