The football team at Grace Brethren High School, a ministry of Grace Church, Simi Valley, Calif. (Jordan Bakker, senior pastor), has taken the Camino League football title again, according to an article in Saturday’s VC Star. A portion of the story appears below. Click here to read the complete article. 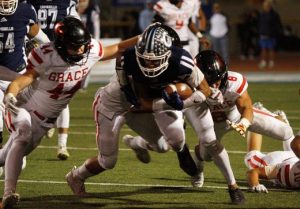 Not a lot of opponents are going to wear down the Grace Brethren High football team.

Or overpower, outmuscle and outphysical the Lancers through all 48 minutes.

“We do a lot of conditioning,” senior defensive back George Bowers said through a smile. “Really, we take pride in being in better shape than everybody we play. We keep going, and we keep after you.”

Mikey Zele produced big plays with his arms and legs in collecting 178 yards in offense and one touchdown, Josh Henderson rushed for 141 yards and one touchdown and the Lancers’ smothering defense limited their powerhouse rival to 180 yards and one score in Grace Brethren’s 28-13 victory over previously unbeaten Camarillo in their showdown at Moorpark College.