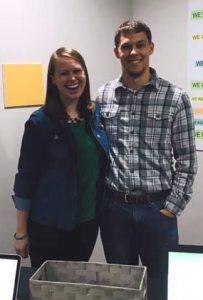 “We think a lot of people feel like they don’t have the means to make an impact, or at least they don’t know how to go about it,” says Cassy Spivey, a member of Western Reserve Grace Church, Macedonia, Ohio (Jason Haymaker, lead pastor). “The Five Dollar Club is a way that everyone can play a little part in something that is bigger than themselves.” The Five Dollar Club is a “club” in which members give five dollars a month to be used to support a chosen organization.

The club has focused on many projects, like donating food to the community’s food pantry and purchasing personal hygiene products for a homeless shelter. One of the staples of the Five Dollar Club is called “clubbing.” When dues are collected, the money is divided among a small group of members and they are told to bless the community in tangible ways.

“We were able to buy groceries for a ton of people,” says Sarah Queen, a member of the club. Another group of members were able to pay the bill for eight parties at a local restaurant and had money left over to purchase items for a food pantry.

“The Five Dollar Club unites our church as a family,” says Cassy, “it’s a reminder to people that their role and part matters.”

Editor’s Note: Visit the Five Dollar Club website (wrgc.life/five-dollar-club) to see all of the recap videos.

Editor’s Note: This story first appeared in the GraceConnect eNews and was reprinted in the Winter 2020 issue of GraceConnect magazine. Click here for your complimentary subscription to this quarterly publication.