Ron Smals, pastor of Woodville Grace Brethren Church, a Charis Fellowship congregation in Mansfield, Ohio, is interviewed on WMFD, the north central Ohio news station, about the National Day of Prayer. He, along with several other pastors in the area, led the observance of the day of prayer in Mansfield on Thursday. A portion of the story appears below. Click here to read the complete article and to view the interview with Ron.

Local Officials And Clergymen Gather For Day Of Prayer 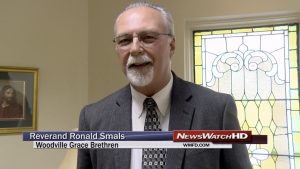 RICHLAND COUNTY, OH – Clergymen and elected officials from all over Richland County gathered Thursday in observance of the National Day of Prayer.

The event was held at First English Lutheran in Downtown Mansfield after being moved from the central park gazebo due to weather concerns.

The event began in the 11 o’clock hour and lasted until 1. Among the handful of speakers were Reverends from prominent local churches, including Rev. Jody Odom of Ambassadors of Christ, Reverend Ron Smals of Woodville Grace Brethren and Reverend Al Akuchie of the Richland Community Prayer Network, among others. Reverend Akuchie gave the keynote speech for the event.

Also in attendance and performing was the IMAGE choir from Mansfield Christian, led by Dan Fleming. The choir gave performances of worship songs throughout the event.

Click here to read the complete article and to view the interview with Ron.