It was a snowy Saturday in Winona Lake, Ind., as a the first winter storm of the season blanketed the region. But it didn’t stop the Grace College women’s and men’s soccer teams from advancing in tournament play. Below are two stories (and a video) from the online news site, InkFreeNews, reporting on Saturday’s games. The women’s team bested Park (Mo.) in a 2-1 win in the first round of the NAIA Women’s Soccer Championship. The men’s team earned an automatic bid to the NCCAA national championships with a 2-0 win over Roberts Wesleyan. Portions of the stories appear below. Links are included to read the complete articles.

A Most Memorable ‘Opposite Day’

WINONA LAKE – The elements forced changes. Insulting the soccer sensibilities, Grace College women’s soccer head coach Michael Voss decided Saturday would be ‘Opposite Day’. In the teeth of a raging snow storm Saturday afternoon, the change of plans allowed Grace to claim a 2-1 win over Park (Mo.) in the first round of the NAIA Women’s Soccer Championship.

For a Grace club that has prided itself on possession and buildup to smother its opponents, Voss realized quickly that adjustments needed to be made. As the pitch was becoming covered in heavy, wet snow, ‘Opposite Day’ was instilled.

Mentioning to his bench and anyone within earshot as the early moments of the match wore on, Voss professed, “This goes against everything you were ever taught in soccer. This can happen, we just have to do Opposite Day.” The plan was to send balls over the top of the defense and sprint to space. Eliminate combinations. Limit back passing. Not just when it was convenient, but every time on the ball.

“This is how we get to Alabama.” 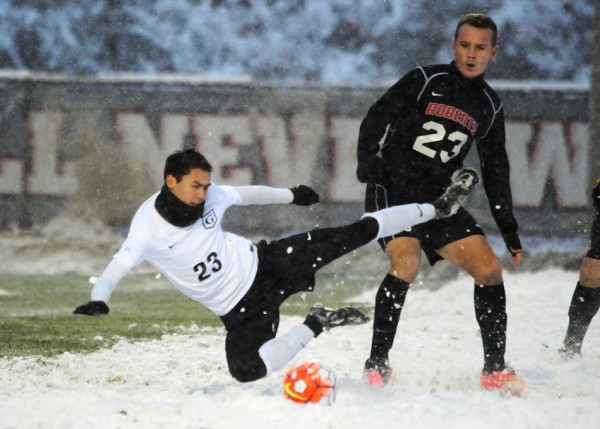 Damon Binkley slips on the surface, defended by Sam Moody.

Goals from Nakilee Weni and Damon Binkley propelled the Lancers to the championship of the NCCAA Midwest Region Tournament at Miller Athletic Complex.

The match was snow-filled from start to finish and included three second-half red cards — all on the visiting RedHawks (10-7-2).

“The team faced the challenge of the weather with a positive mindset and just decided to win tonight,” said Grace head coach Matt Hotchkin. “We didn’t think the game would be pretty, and we had to take what we could get. The guys weren’t able to fully play our style, but they adapted and got the job done.”

The first half was tame compared to what was in store. The opening 45 minutes included 10 shots — 6-4 in favor of Roberts Wesleyan. But neither side could score on the slick, snowy surface.