So, What Is a Grace Brethren Anyway?

It’s happened to all of us – that awkward moment when someone asks, “So, just what is a Grace Brethren, anyway?” How do you answer? More times than we like to admit, many of us default to comments like, “Well, we’re sort of like the Baptists, except we have a different way of baptizing and organizing our communion services.”

Since leaving the mainstream Brethren in the late 1800s, our movement has wrestled with an ongoing identity crisis. Early in the last century, as the liberal vs. conservative debates raged, we placed ourselves in the camp of those committed to defending the fundamentals of the faith. As the century progressed, it was soon apparent that we belonged to a global movement that used the label evangelical. While few of us are completely comfortable with everything clustered under that broad umbrella, the label fits when understood in light of the other major divisions of global Christianity – Catholic, Eastern Orthodox, Mainline Protestant, and Pentecostal. But none of the typical labels provide a really satisfactory answer to the question, “So, just what is a Grace Brethren, anyway?”

Through The Identity Initiative, a group of leaders representing the global Grace Brethren movement is proposing a different path forward. Imagine the following scenario, and see if it helps reframe our answers in ways that are more meaningful to those inside and outside of our movement:

“So, what is a Grace Brethren, anyway?”

“We are a global fraternity of churches that, above all, is committed to following Jesus Christ, as revealed in the Bible.” 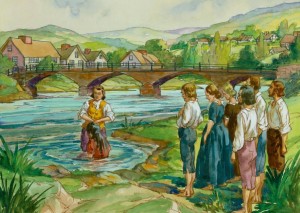 Illustration courtesy of the Brethren Historical Library and Archive

“While our movement began in Germany in the early 1700s, we trace our roots back through history to the New Testament and the early church. In fact, we base our core beliefs on 2,000 years of orthodox Christian teaching, and we share these beliefs with more than 545 million evangelical Christians today.”

“But what makes you different from other churches?”

“The majority of what we teach and obey are convictions we share with other Christ-followers who base their doctrines on historic orthodoxy and identify with the global evangelical movement. But like most physical families, as a spiritual family we have some unique characteristics and convictions that come out of our shared journey over the past 300 years. Some of these include …”

As other articles in this magazine will demonstrate, one of the principal goals of The Identity Initiative is to reframe the way we understand ourselves (internally) and the way we explain ourselves to others (externally). What better place to begin than with a fresh way of answering the question, “So, what is a Grace Brethren, anyway?”

Read Getting it Right, Again!