A story about Grace College’s outstanding soccer player, Meghan Wiles, was included in yesterday’s (November 18) Herald Bulletin, Anderson, Ind. A portion of the story appears below. Click here to read the complete article. 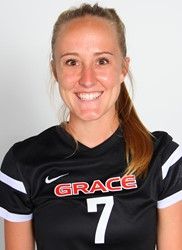 WINONA LAKE — Meghan Wiles is celebrating the end of her college soccer career in historic fashion.

The Pendleton Heights High School graduate is a senior center midfielder for Grace College, which qualified for the National Association of Intercollegiate Athletics National Championship for the first time in the program’s history.

Wiles arrived at Grace after spending the 2012 season at Indiana University. Her transfer enabled her to reunite with older sister, Kaitlan, who played for Grace from 2011-14.

“It was really awesome to play with my sister for the first two years,” Wiles said.

A starter most of the past three years, the captain had four goals through 17 games. Fifth on the team in points, she has surpassed her goal total from each of the previous two years. She has been named to the all-league first team.