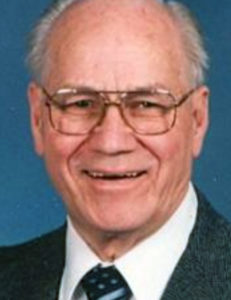 He was a resident of Kosciusko County, Indiana for the past 30 years, where he was a member of Lakeland Grace Brethren Church of Warsaw, Indiana.

He was born on April 2, 1921 in Dallas Center, Iowa, to Clarence Lyman Hoyt and Anna Leola (Dorsey) Hoyt. On August 22, 1942 he was married to Kathryn Ruth Hirschy, who survives in Winona Lake, Ind.

His funeral service will be conducted on Monday, February 25, 2013 at 10:00 a.m. at Lakeland Grace Brethren Church, 2538 South County Farm Road, Warsaw, Indiana and officiated by Dr. Russ Simpson. Burial will follow at Oakwood Cemetery of Warsaw.

Memorial donations in Solon’s name may be directed to Lakeland Grace Brethren Church, 2538 South County Farm Road, Warsaw, Indiana 46580 and would be appreciated by his family.