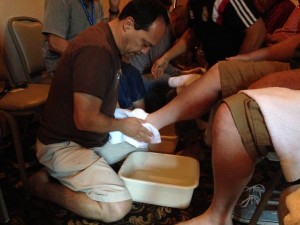 Footwashing was part of the three-fold communion.

Three-fold communion Monday evening led off the annual South Focus Retreat, which being held this week at the Florida FFA Leadership Training Center near Haines City, Fla. Ministry leaders from Grace Brethren churches in Florida and around the country have gathered for the retreat, which is the final of five regional events held each year in the Fellowship of Grace Brethren Churches (FGBC).

Randy Smith, pastor of Grace Church, Sebring, Fla., led the communion service, assisted by staff members from Sebring. He set a table similar to what would have been provided for Jesus and the disciples at what became the last supper.

Sessions are being led by Dave Guiles, executive director of Encompass World Partners, who has been leading the discussion on “Shaping the Future.” It is designed to begin the conversation about the Charis Commitment to Common Identity, a summary document of the biblical convictions, mutual commitment, and common practices for the Grace Brethren movement in North America. 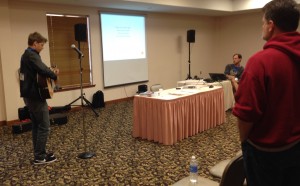 Seth Tweeddale is leading worship for the retreat.

Worship is being led by Seth Tweeddale from the Grace Brethren Church in Melbourne, Fla.

The retreat began Monday afternoon with with a brief history lesson via a video-taped lecture by the late Dr. Dave Plaster. In the video, he discusses the development of the Fellowship of Grace Brethren Churches, beginning with Alexander Mack in Schwarzenau, Germany more than 300 years ago.

This morning (Tuesday), participants have divided into groups of to review a draft of the Charis Commitment to Common Identity.